Strike Squads form the core of the Concord Combined Command’s (C3) armed forces and are amongst the best-equipped fighters in all of Antarean space. They carry multi-function plasma carbines capable of punching a hole through alll but the heaviest armour or shooting rapid bursts of deadly plasma bolts. Strike Troopers are protected by invisible hyperlight armour suspended from the nano-cored casing of their battle suits. This advanced armour provides complete atmospheric isolation as well as effective shielding against enemy weapons. Strike units are often accompanied by small buddy drones, such as spotter drones that act as the unit’s ‘eye in the sky’ feeding vital targeting information into the squad’s sophisticated combat shard.

Good options for the Strike Squad including taking the upgrade to a lance trooper and including a spotter to enhance the accuracy of the lance. Whilst this is partly because of its penetration power, it is also due to its ability to shoot at a separate target than the main squad, perhaps an armoured unit, but certainly resulting in the squad able to put out 2-3 in a turn on two separate units if the leader takes Slingnet as well.

The C3 Strike Command squad is armed similarly to the standard squad but the leader has enhanced special attributes to reflect his abilities. The squad has veteran troopers who are more accurate than normal squads – something to consider as, numerically, it can be upgraded to as many as a normal squad.

Command, Follow and Leader are in the core rulebook.
* One Strike Trooper in a Strike Squad can be upgraded to carry a hard-hitting plasma lance.

The Strike and Command squads can be given extra troopers, a spotter drone and/or synchroniser drone, as well as plasma grenades. The Squad Leader or Commander can be given SlingNet ammo for the X-sling and have a Leader upgrade. The Command squad can also be given a medi-drone.

Strike formations are often accompanied by units of C3D1 Light Support Drones. These lightly built drones are self-sufficient fighting machines that are ideally suited to the mobile support role. They are armed with plasma light support weapons, which are easily capable of dealing with even relatively well-protected targets. Although not as heavily armoured as larger drones, their composite skin and reactive kinetic shields enable them to withstand hits from most light arms.

Whilst the Concord is more comfortable with ranged warfare, they do utilise whatever panhuman morphs come their way in roles meant to complement the core Strike troops. Whilst the calculating Vyess are utilised in intelligence roles, one such combat-oriented morph are the whose combative nature makes them ideal assault troops for the Concord.

We also have an early render of the strike troops during the games development.

And the Tabletop Warlords (TTW) have a video review of the Strike Squad on their YouTube channel.

The Light Support Drone on the sprue has the following components and is assembled as shown. If buying an army box, most of your D1 drones should be equipped with the plasma light support weapon with only one (or at most two) with subverter matrixes. 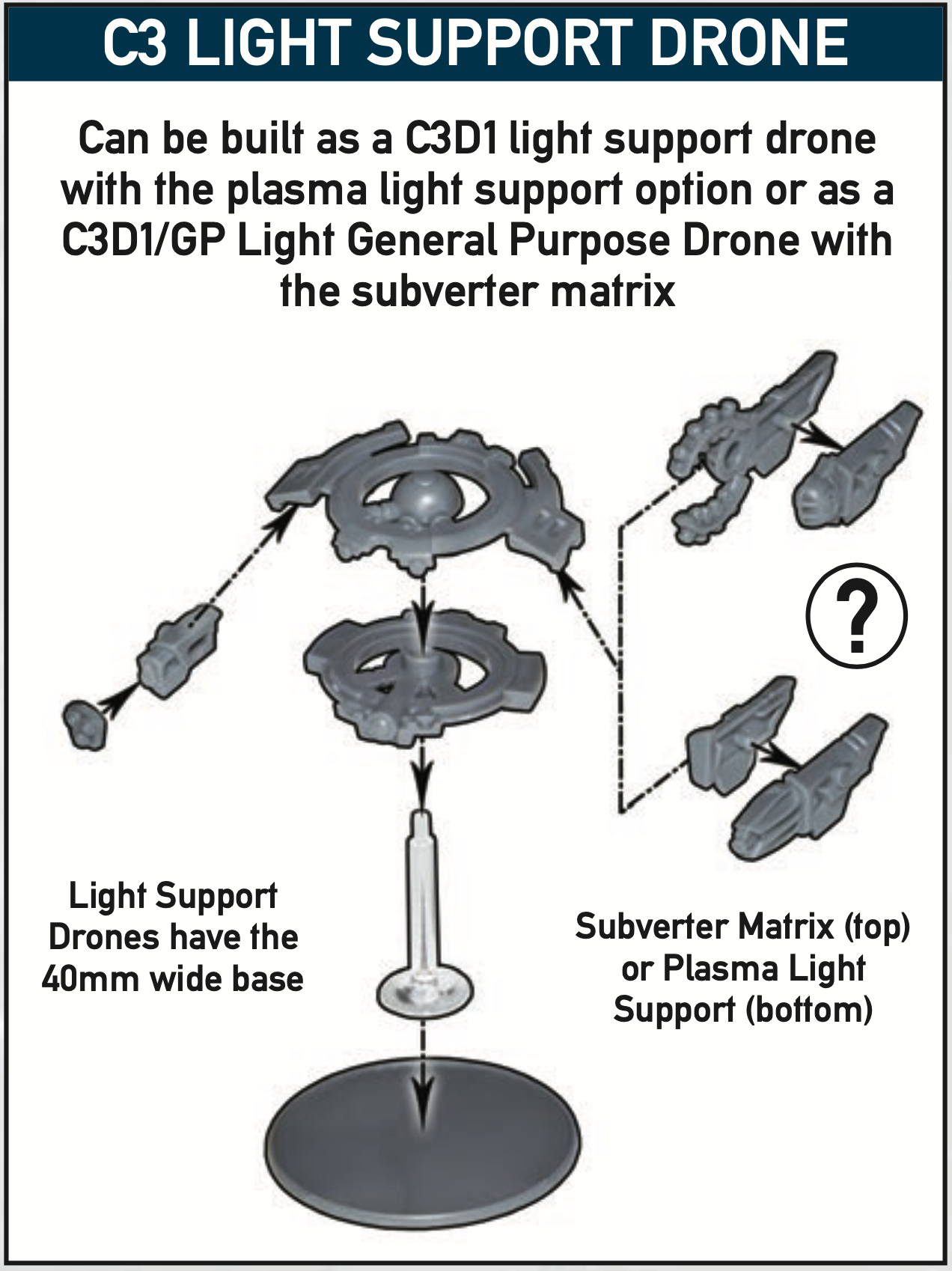 C3 Strike Squads & Support Drones are available in a two-squad, two-support drone pack of plastic sprues, as an individual plastic sprue or as individual, metal models. Being core troops, they are also available in other deals, armies and sets. Each plastic sprue contains five troopers, with the option for a plasma lance, plus two spotters plus aC3D1 or C3/GP drone with subverter.