Terrain is very important in Beyond the Gates of Antares and impacts on a game in three ways. It can effect line of sight – blocking shooting opportunities, it can effect movement – squads can potentially suffer a penalty by having their movement reduced and it can offer cover – improving a resist value (Res) by offering better protection.

With the Warlord Antares staff campaign starting shortly we thought it was time to make sure we had plenty of terrain to fill the battlefields we will be fighting over. Starting from fresh we decided the best thing to do was pick up a copy of the rulebook, turn to the Terrain section on page 50 to decide what was needed and more importantly work out how we were going to make it.

By ‘terrain’ we mean the actual landscape over which our army will fight, whether natural or otherwise. As such, terrain encompasses everything from lush vegetation – the equivalent of jungles and forests – to industrial facilities, agricultural zones and innumerable kinds of habitation. The worlds of Antarean space are as varied as it is possible to imagine. Some are densely populated worlds of towering cities whilst others are virtual deserts of broken rock and lifeless craters. All are potential battlefields for our forces.
~ Antares Rulebook (page 50)

There are three broad types that terrain is divided into – Area Terrain, Obstacles and Hills & High Ground. For the purpose of this first article we will only be focusing on creating Area Terrain – we will cover obstacles, hills and high ground as well as buildings at a later date (buildings are separate and can be found on page 59 of the rulebook).

AREA TERRAIN
By area terrain we mean a delineated area representing some kind of terrain feature such as a boulder field, a patch of vegetation, woodland, marsh, sand dunes or whatever. It doesn’t really matter how the area is delineated so long as it’s clear where the terrain starts and ends.
~ Antares Rulebook (page 50)

With our campaign being set initially on a desert landscape we hunted out anything in the rulebook that was appropriate, ending up with the following list.

The next question was how were we planning on depicting the actual area the terrain was covering? Some players prefer to do this by using a few rocks, vegetation or whatever kind of terrain is being represented. We on the other hand decided to make a separate scenic model with its own base. The reason for this is quite simple – we find it prevents any arguments about a model being in or out of the actual terrain feature. If a model’s base is on the terrain base then it is in that terrain.

So with this ruling as our starting point we decided to get some area terrain bases made or ‘base plates’ as we call them. Not only did we have these base plates cut out we also had different sized circles cut into them with the idea that we could plug in different bits of scenery. This would make each one very flexible and reusable in different games and settings. 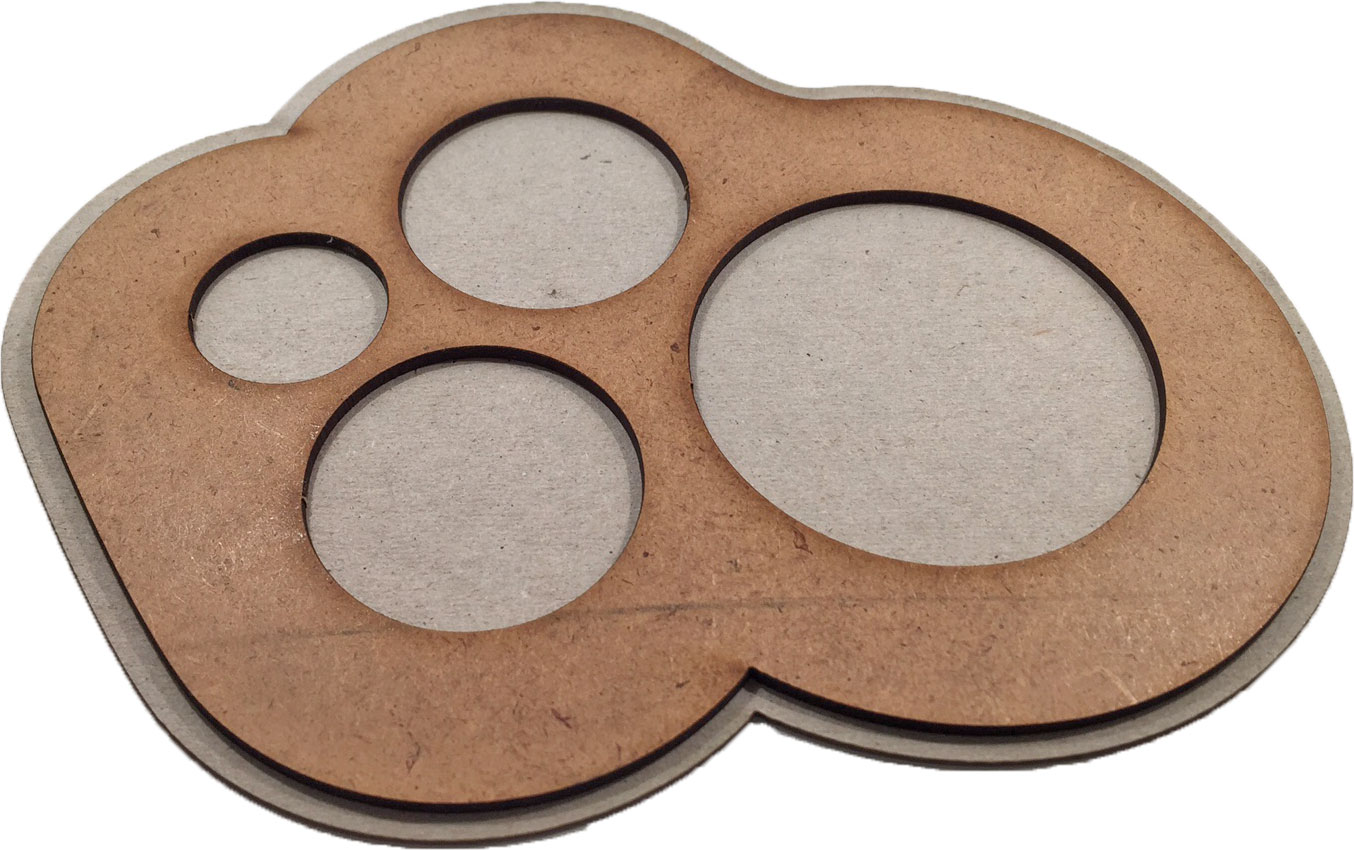 With our initial base plates cut we thought we would give our first piece of area terrain a go with the first type on our list which was ‘Low Scrub’. As the campaign is set in a desert we considered this to indicate man-height or slightly larger exotic, fleshy, cacti type plants.

LOW SCRUB
Low Scrub is an area of scattered mostly low vegetation that offers a slight degree of cover but which does not impede the movement of troops or vehicles. Think of this as tumbleweed or low bushes or fungi up to about man-height or slightly taller.
LOS: Light Terrain
COVER: Res+1
DIFFICULT: NO
~ Antares Rulebook (page 52) 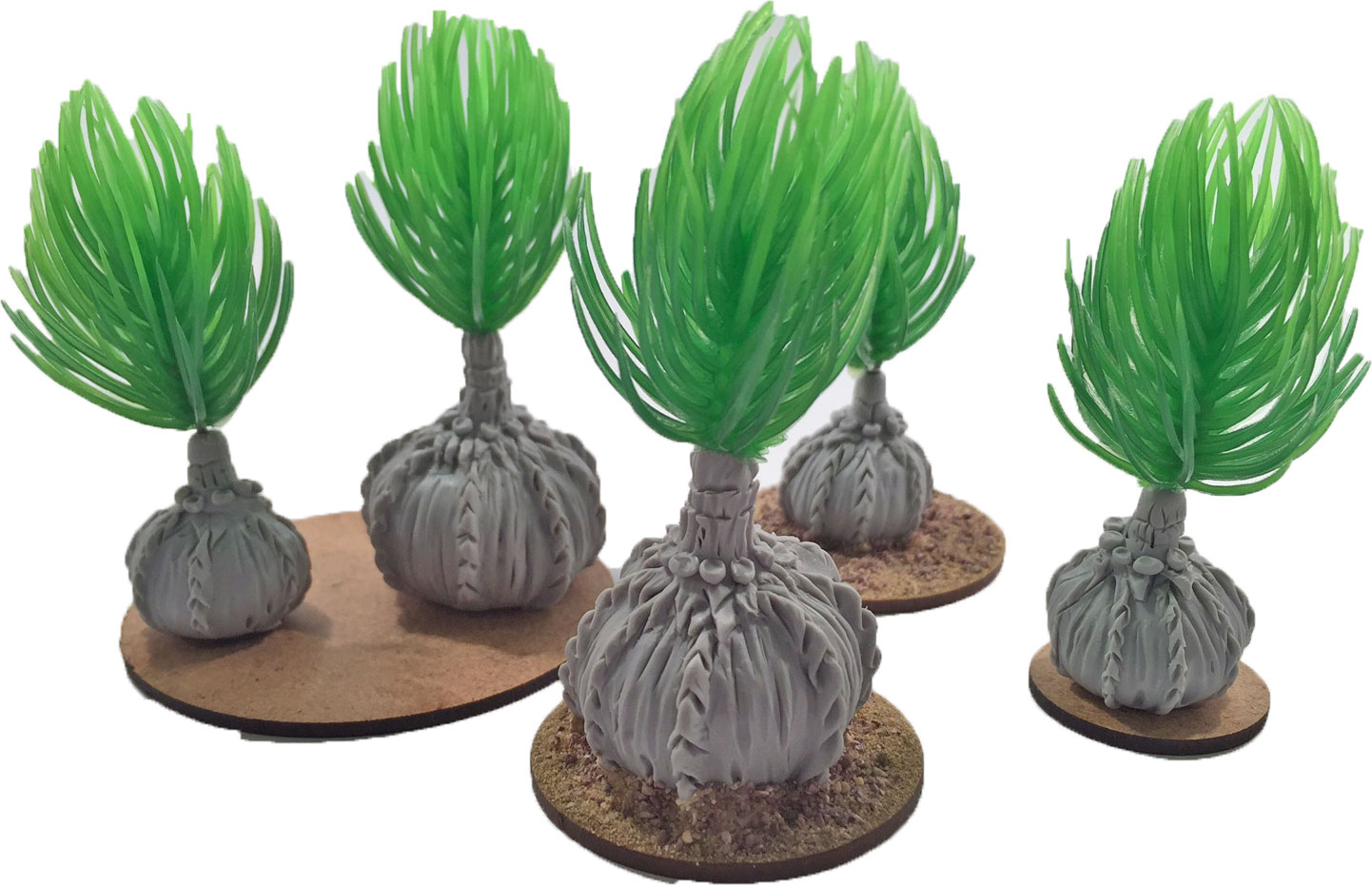 As it was for the Warlord campaign we were lucky enough to get our hands on a few of the bulbous resin plant bases made here by the resin team to be used as plant scenery by the design studio. To each of these we added a plastic green spiky top which made them look like ‘space onions’ and then mounted them either individually or in pairs on MDF bases to fit the holes in the base plate, as shown below. 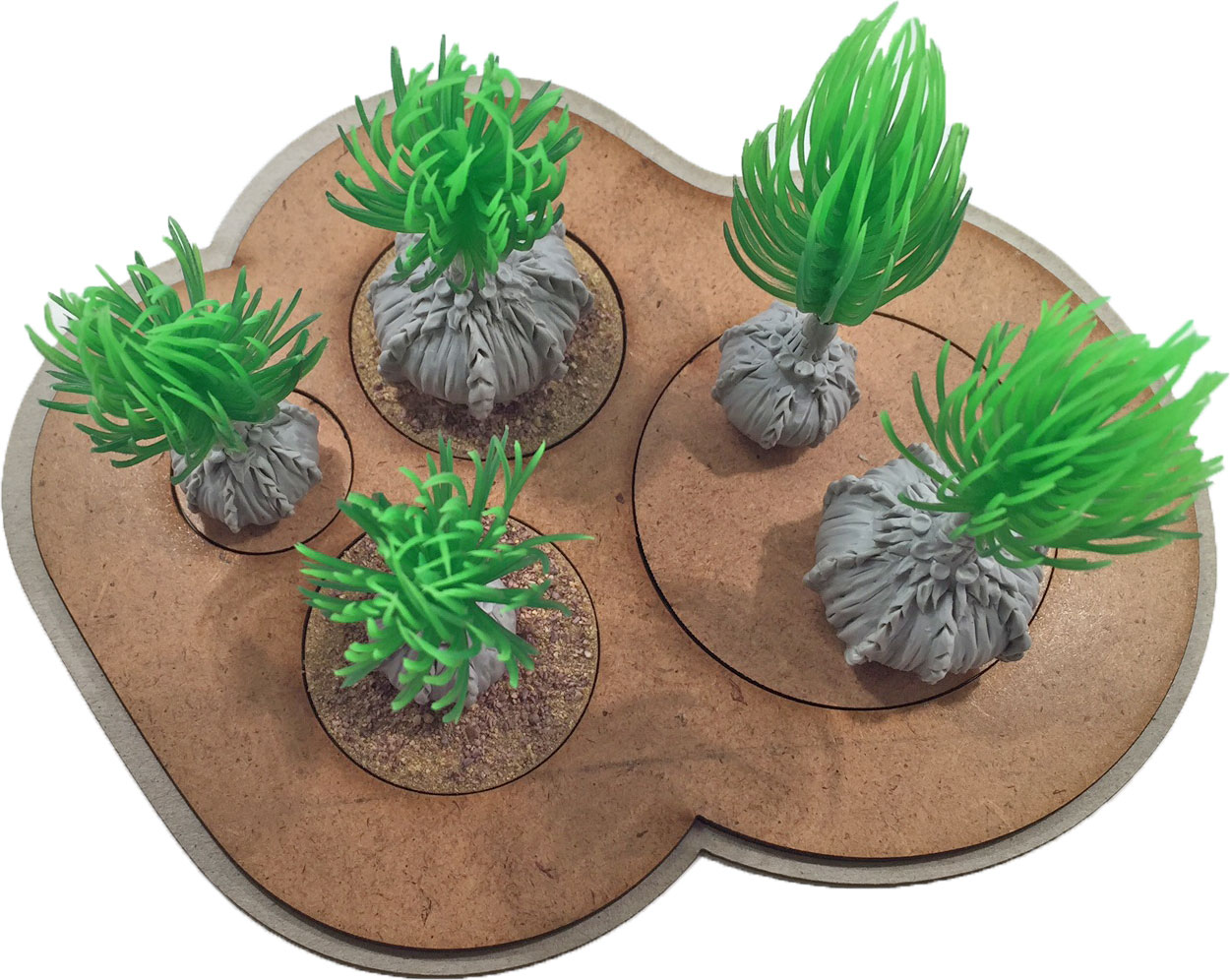 We have added sand to to the bases of two of the ‘space onions’ as a test with the idea being to sand all the bases and the base plate and paint them all the same colour to match. We also plan to paint these plants the appropriate colours for a desert world however we do have some bright blue and turquoise flock to add to the green fronds to make them really pop!

The initial base plate idea we thought was a success so it was time to really test it by trying a more complicated piece to see if it could work for this too. We made the decision that if this did work out there was no going back and we would be making all our area terrain like this going forwards.

Reviewing our list once more, the most complex piece would be the Junk Yard and with this being Beyond the Gates of Antares we decided to make it a ‘Ghar Graveyard’ to add a bit of flavour.

Our willing volunteer, Darren Evans – our Mail Order supervisor, was sent off with plastic Ghar frames, putty, a number of different sized bases and a brief to make us a range of destroyed Ghar suits.

This is what he came back with. 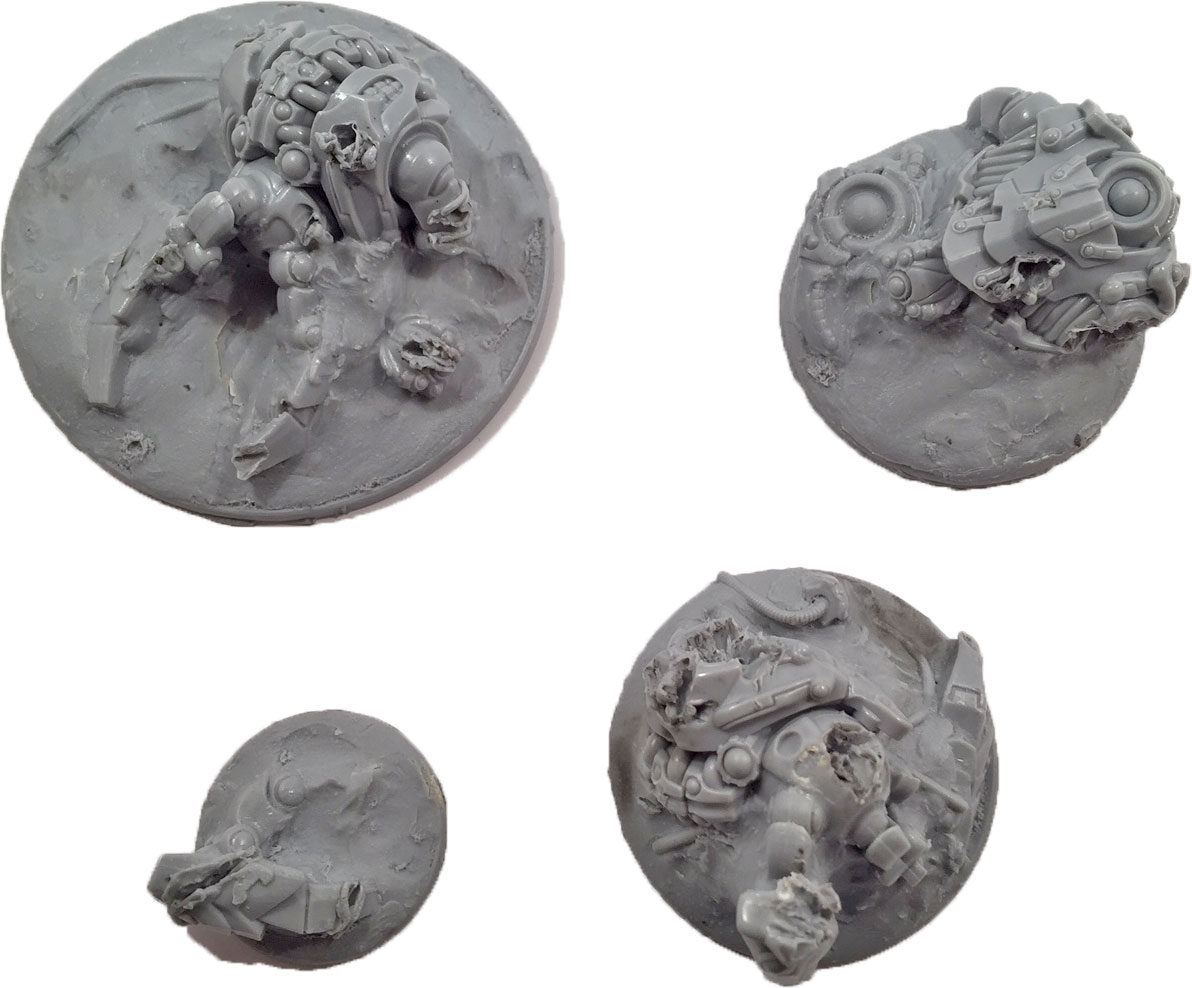 To say we were impressed would have been an understatement, he went a bit bonkers and ended up making 10 different bases of Ghar junk not just the four pieces shown here. Plugging these four into the base plate gave us our ‘Ghar Graveyard’. 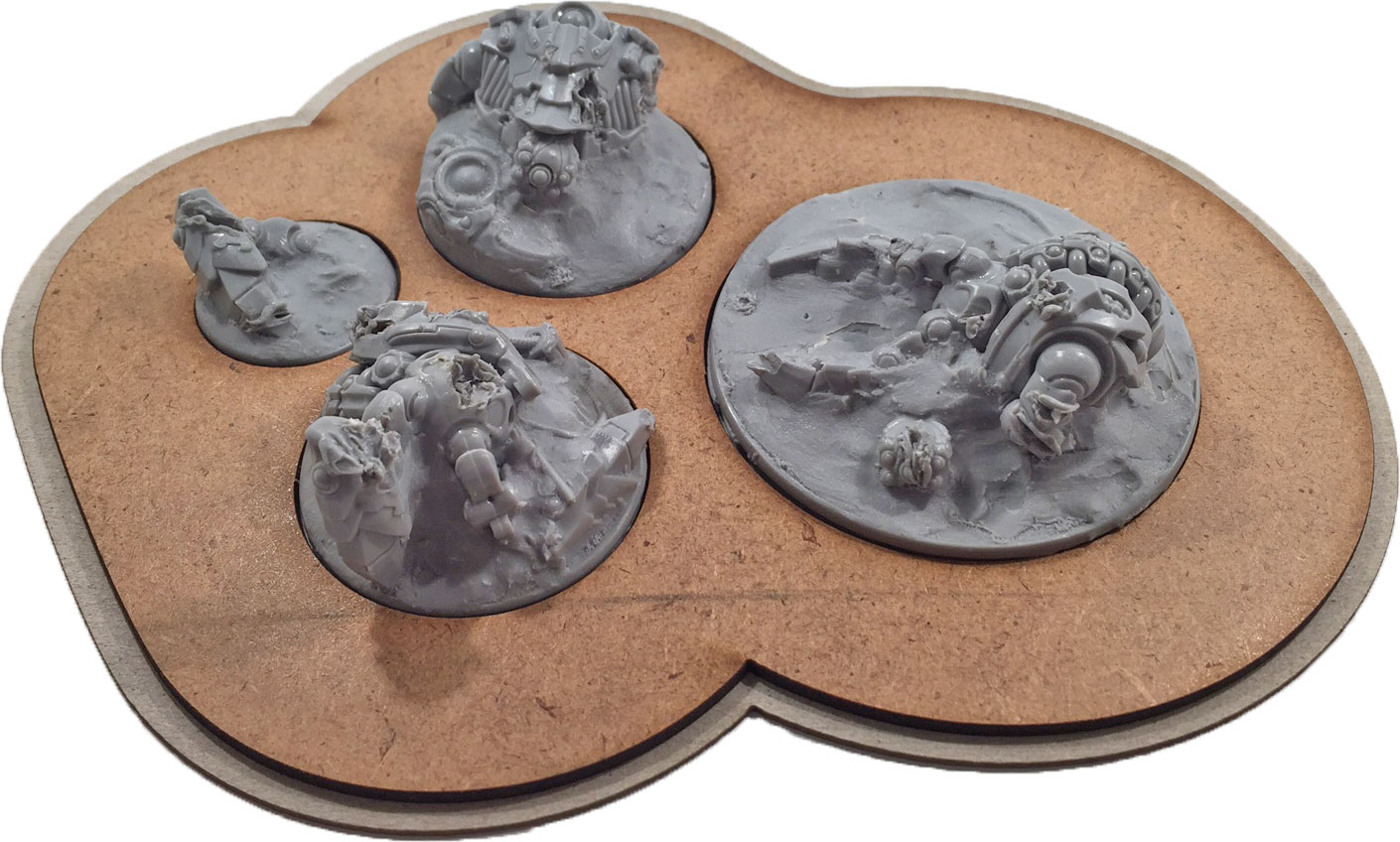 With the first two bits of area terrain designed we now had a clear idea of how we were going to proceed. Flushed with this initial success we plan on cutting different sizes with the caveat, a single base plate should be no bigger than 8″ x 8″. We can always create larger areas of terrain by putting two or more together. 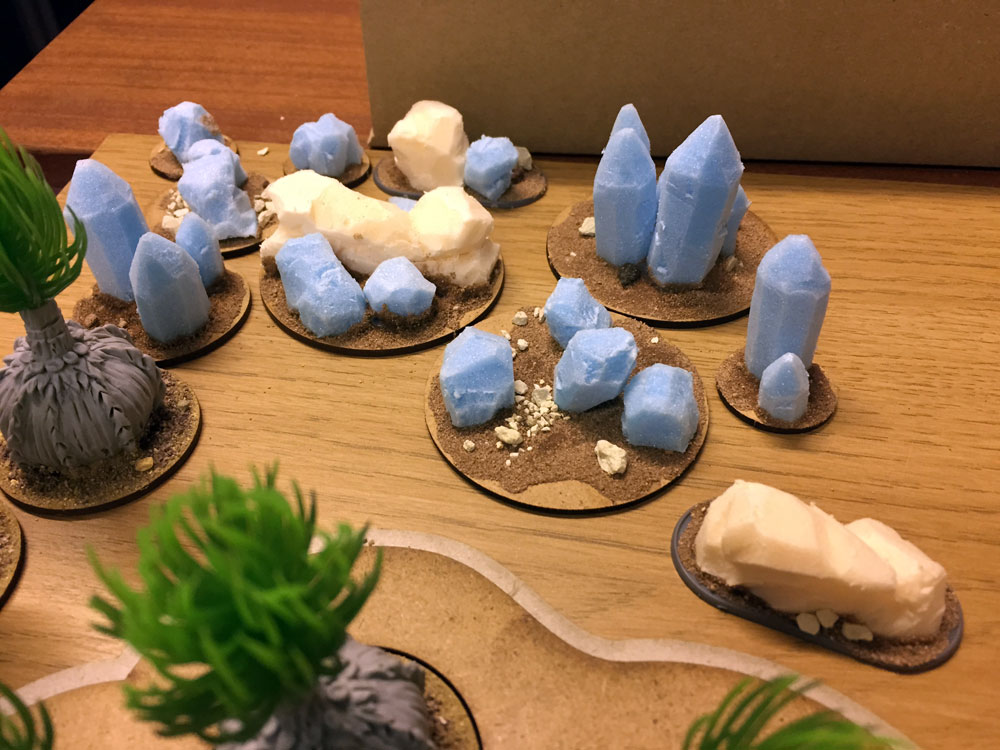