Batu and Baray Fiction by Tim Bancroft
Dated a short while after ‘The Claiming of Shamasai’ and ‘Batu and the SITAI’ and leading up to the Chryseis Shard.

The other parts in the series are Part II, Part III, Part IV and  Part V, and we have overview of the Batu and Baray story arc.

Prince Batu Delhren was infected by the Shamasai Dust, an ancient, virulent bionanospore (a biological-artifical nanospore) that took over his personal shard. Despite the presence of copious Freeborn anti-IMTel cleansing and layered protocols, the bionanospore overcame all his shard interface implants (those given to all leaders of the Vardos Delhren) and turned them to its own use. House medics and technicians were only just able to keep him alive so, now, he exists in a rather precarious equilibrium with the Shamasai Shard.
The problem is that the Shard can be rather protective and can sometimes even use his own body mass as energy to fuel its needs. When subsequently, his damaged shard implants were corrupted still further by the algorithms of a warlike drone species, the House Delhren assigned him a bodyguard-cum-protector, Decurion Baray Tsulmar. She has orders to both protect Batu as a bodyguard but to kill him if his uncontrollable personal shard turns out to be a threat to the Freeborn house.
Needless to say, both Batu and Baray are wary of the arrangement.

The meteor plummeted through the atmosphere and smashed into the desert floor, vaporising instantly. The impact plume settled and air shimmered in the heat. Though there was barely any breeze across the barren landscape, ash-grey dust trickled down the sides of the crater, swirled into the air where it gathered together and grew into a dust-devil. Flares of light appeared within the swirling dust and it weaved erratically towards the horizon.

The swirling dust absorbed every struggling cactus it touched, every blade of burnt grass. As it moved, it consumed, grew larger, and left nothing but a sterile trail in its wake.

Batu Delhren leant back against the cask, held the glass up to the light and gently circled the deep wine around the sides. “This,” he said, “is positively…” He took an air-slurped sip, washed the wine around his mouth, made a face and spat. “Is positively ordinary. No delicacy at all.”

“Ah, good,” said his vineyard manager. He held out his massive, rock-like hand. “Give. I might be able to use it in the Boromite bar in town. Or on the Spyker’s Rub.”

Batu rolled his eyes and handed over the half-full wine-glass. “You’ll have to do a lot to it, Dirag.”

The Boromite idly rubbed at a battle scar as he sniffed the wine. “Pretty heavy on the tannins, I reckon.” He delicately upturned the glass and swished the liquid round his mouth. “Yep, thought so. It’s full-bodied—“

“Rock solid, you mean,” said Batu, the corner of his mouth twitching mischievously; Dirag glared at him. “Don’t give me those stoney looks.”

“Heard them all before, boss, every one of them.” Dirag held the glass up to the light. “Good colour, though. And the lack of subtlety means I can add some really hefty spices. The Gangers will love it. Yeah, a heavyweight punch.” He chuckled, clenched his huge fist and looked sidelong at Batu.

Batu sighed. “I sometimes think you have no humour at all, Dirag, then you say something like that.” He waved his hand around the cellar. “Take this whole batch, then.”

Dirag smiled. “Great, boss.” He mopped the glass clean, his bulky fingers strangely delicate. He nodded towards the other cellars beyond the door. “You checking the rest?”

“No,” said Batu. “I’ve been summoned. My uncle.” He led the way from the cellar into a corridor off which branched numerous other cellars. Above each side passage was a holodisplay showing the contents and environmental data; from some corridors came a faint, cool breeze; from others a sense of warmer air. Batu absently checked each display as he walked past and was satisfied to note the conditions for each batch was perfect. He noticed Dirag’s faint smile.

“I keep a constant eye on the environmental controls,” said Dirag. “It’s perfect for each batch. He pulled out his control pad. “Want me to call you a Delhren shuttle? It’s official business.”

“Of course,” said Batu. “Though whatever errand Uncle Ordaichen is sending me on is almost certainly a waste of time.”

“He’s still the vard, and the orders had the vard’s seal. Even you can’t ignore that kind of summons, Mr Batu.”

Batu stopped in front of a holopic and stood to attention. The holo depicted a pair of Delhren in formal pose, the woman seated and dressed in the finery of a Delhren princess, the man standing and garbed in the uniform of a senior, Delhren ship’s captain. He saluted the couple and stared at them for a few moments. “That’s Prince Batu, Dirag,” he said, absently. “Or Sire. Never Mr.”

Batu glared at the Boromite manager and received a broad grin in return. He groaned, theatrically. “You are incorrigible, Dirag.” 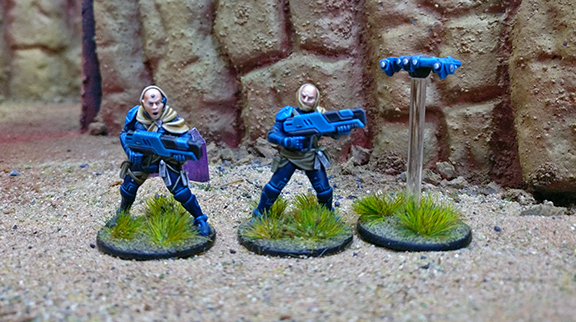 The meteor did not go unnoticed. Monitoring stations picked up the impact, passed the data to an intermediary who correlated it with other impacts, airbursts, meteor flashes in the sky. The information was passed on again, linked with other information to become knowledge.

In a Concord research dome, the colony astronomer shrugged as he read the holoprojection before him. “It doesn’t look like it will happen again for about another 130 years.”

“What was it?” asked the Tanchen colony chief.

“The remnants of a long-period comet, it seems.” The astronomer looked up. “Though only eight four quantum probability.”

“High, but not absolute.”

“We do not have a fully established nanosphere, yet, so monitoring is not as all-encompassing as it is on other worlds.”

The chief frowned. “But if we experienced it this year, at this time, won’t it recur?”

“A light meteor shower, of course. But I think we were unlucky to pass through what remains of the comet’s body. It had a highly atypical orbit, some degrees removed from the plane of the ecliptic.” He shrugged. “In fact, it’s not surprising it disintegrated.” 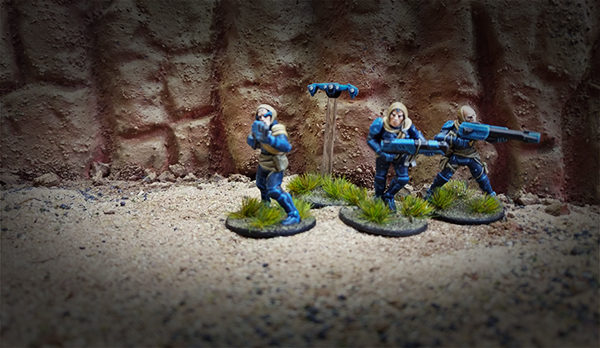 “Oh, I believe so. A few impacts, a fair few aerial bursts and a lot of lighter trails. It’s difficult to say how many there were as they disintegrated in the atmospher—“

“Understand. We don’t have the monitoring we’d normally expect.” The colony chief pushed back his chair.

The colonial astronomer smiled. “Quite.”

“Well, Stars, thank you.” The colony chief stood. “I will leave you to your studies.”

“My pleasure, Chief. I’ll see you tonight at the concert.”

“Wonderful to see you, sire.” Baray smiled at Batu and waved at the ornate doors that had just closed behind him. “Has the vard briefed you?”

“More’s the pity.” He ignored the vardanari outside the door to his uncle’s throne room and strode down the gilded corridor towards the transmat. Baray fell into step beside him, her purple cloak streaming behind her as if wafted by a breeze. Batu scowled. “Wind effects?”

“Of course, sire. Do you forget giving the order that your bodyguard should look both impressive and immaculate? And I do still command your bodyguard.”

“By the vard’s orders, Decurion.”

“But you like having me around.” Bara’s smile grew to a grin.

Batu grunted. “We are to investigate a recently discovered system. The vard seems to think I’m a nanosphere expert.”

“Well, you are infected by the Shamasai bionanospore. And that’s been corrupted, too.”

“Thanks for reminding me,” grumbled Batu. “It doesn’t mean I know all about it.”

“But it does mean you and I have had to research everything we can to work out how dangerous it is.”

“You mean, we’ve had to because the head of house security doesn’t like it?” Batu shivered. “Jarain Tridethe never liked me beforehand. Now—”

“I think it’s a bit more than that. He’s tried to throw me out several times after claiming I’m a threat to the house. In council, too!” Baray remained silent. “And now he wants to send me on an errand.” Batu tugged at his lip in thought. “I wonder what he has up his sleeve.”

They stopped by the transmat, a large design intended to allow a representative and their delegation to arrive at once. It was built to impress, with filigree, gems and the sheen of precious metals everywhere. Batu grimaced. “This decoration is heavily overdone.”

“But it does impress the less advanced visitors,” said Baray. She faced Batu. “Where are we going?”

“A fast trade corvette – a family ship – the Song of the Telidh. Have your squad report there with our kit.”

“Very well.” Baray unconsciously tilted her head and worked her jaw as she transmitted the order over her subvocal implant. “Done.”

Baray looked surprised. “The subvocal? The aural implants? A bit awkward, at the moment.”

“You’ll get used to them. In the long run they’re much better than a helmet comm or a verbal interface to the house nanosphere.” Batu held up a finger. “Transmat: take us to the Song of the Telidh, please.”

A melodic voice spoke from mid-air. “Very well, Prince Batu.” A bright light shone, perception wrenched and the ornate surroundings of the large transmat were replaced by the more prosaic dull greys and blues of a Delhren freighter. 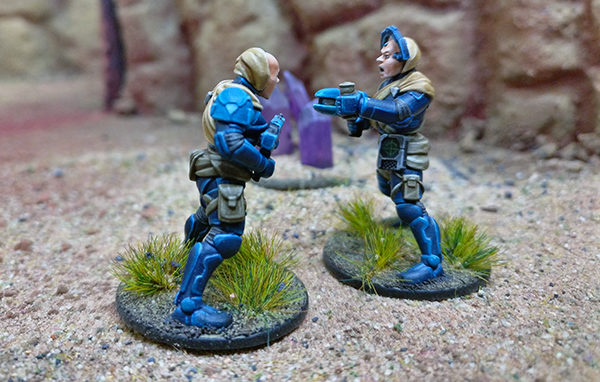 Footsteps came from the open doorway. A small figure appeared, human, female, classically dark-haired and olive-skinned in the Delhren fashion. She was dressed in the workaday blues of a Delhren officer but her face was flushed and she was panting as if running. “Prince Batu? I’m s-sorry. We weren’t expecting you so soon. I was only just told.” She bowed. “Welcome to the Telidh family and the Song of the Telidh.”

“The vard commands and I obey,” murmured Batu, bowing in return. “You are?”

“Ensign Elnar, sire. On loan to the Telidh to pick up some shipboard time.” The slim figure stood straight and tapped her collar on which could be seen a pair of radial insignia. “I’m senior sensors specialist. I’ll be working with you.”

Batu nodded. On a trade corvette the size of the Song, there would be few officers of Lieutenant rank or higher, the ship itself only rating a First Lieutenant as commander. “Very well,” he said. “Pleased to meet you.” He gestured to Baray. “Decurion Baray, the head of my escort and bodyguard.”

Ensign Elnar bowed. “My pleasure, Decurion. Your reputation precedes you.”

“I have a reputation?” asked Baray. Elnar glanced nervously at Batu. Baray grinned. “Ah, not in front of the Prince, yes?”

“I-I mean after the events of the substrate-independent AI civilisation,” said Elnar. “And Shamasai, of course, and saving the Prince.” Elnar hesitated, clearly nervous.

“Stop it, Baray,” said Batu. “Ensign Elnar, ignore Decurion Baray and kindly take us to the captain. Inform the crew and loader drones that my bodyguard will be arriving shortly with more equipment.” He did not ask if there was storage space: the Song may well have been a corvette but she was a Freeborn trade corvette, one redesigned for use by a Freeborn family. Hold space on a trip like this would not be an issue. “And get me full access to the ship, please.”

Elnar bit her bottom lip and glanced at Baray. The decurion nodded encouragingly. “Sire, we’ve been expressly forbidden to give you anything other than enquiry access and minimal control over sensors.”

“That’ll be Jarain’s orders, damn him.” Batu shook his head. “Just give me everything you can.”

“Yes, sire,” said Elnar. She smiled in relief. “Then follow me. Captain Telidh is expecting you.”

Read the next part in this series here.